Same sex marriage and the law 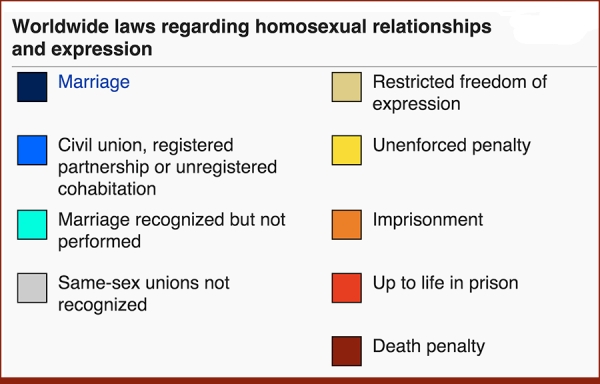 Different countries have reviewed their laws in relation to modern understanding of the nature of gender, sexuality and sexual orientation as well as issues of human rights.

New laws aims are to grant people in a mutual supportive relationship the right to protection under law, for the financial, physical, emotional and social contributions they are making and/or have made in the relationship.

Therefore it is best to go to a website such as Wikipedia for the most current information.

At Wiki, the information is also presented in a graphic form as follows (downloaded at 11.9.2017)

Legal recognition of same sex relationships removes the stigma of disapproval as well as criminality of these relationships in the eyes of the state.

Most importantly, it removes penalties, including death, that once applied in countries where such relationships were previously considered as criminal.

Such moves can lead to better understanding of the diversity of human relationships in the community generally.

And can lead to a re-evaluation of such behaviours by religious institutions.