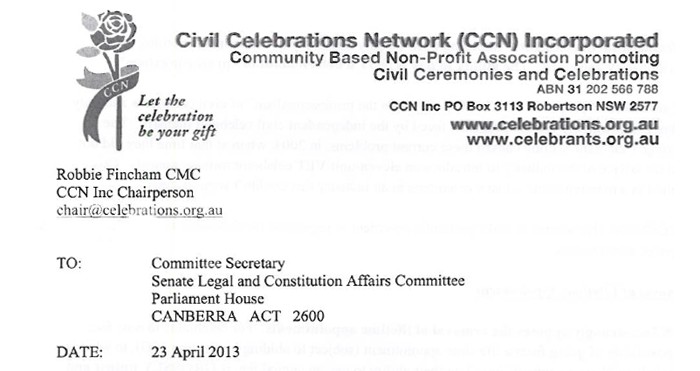 The The Celebrants Network Inc., (TCN) DOES NOT SUPPORT the Government’s latest recommendations to the Marriage Act 1961, as outlined in the two Bills above.  We, the TCN Inc. consider the majority of the recommendations presented in these Bills to be a GROSS example of complete ignorance and discrimination towards the majority of Australians (71% of Australians who choose a civil marriage ceremony) and to the Independent Commonwealth Civil Marriage Celebrants who conduct their marriage ceremonies.

The result of implementing most of the recommendations in the Bills will undoubtedly have a serious and damaging effect on most Australians and this is clearly outlined in CoCA’s submission to the Senate Committee.

TCN unreservedly supports CoCA’s submission in its entirety, to the Senate Legal and Constitutional Affairs Committee.  CoCA’s submission has been compiled by highly experienced and skilled celebrant professionals who intimately understand the Civil Marriage Profession in Australia.  CoCA’s recommendations in their submission WILL help increase the professionalism of celebrants.  Imposing a fee on only one group of celebrants is nothing but discriminatory and elitist.  The ability to pay is NOT a determinant of “professionalism”.

The amendments proposed WILL NOT “increase the professionalism” of civil celebrants and only further compound the current problems faced by the independent civil celebrant profession, which were caused by the Marriage Celebrant Section in 2003 when at that time they did not heed the advice of the industry to introduce an 11 units VET Celebrant Training Celebrant Training Course.   This resulted in a massive intake of new celebrants in an industry that couldn’t support them.

TCN Inc. strongly opposes the removal of lifetime appointments.  For celebrants to now face the possibility of going from a life-time appointment (subject to abiding by Section 39G), to what is essentially a “1 year contract” based on their ability to pay an annual fee, is GROSSLY unjust and discriminatory.   Once again, the suggestion is made that a celebrant’s “professionalism” is based purely on the ability to pay.

Marrying couples will also not have the reassurance that the celebrant they choose for their wedding day will still be registered on their wedding day as many couples book their celebrant 12 or more months in advance.  This situation is extremely detrimental to the marrying public who are entitled to be confident that their marriage celebrant will be the person marrying them on what is one of the most important days in people’s lives.

There are many other more equitable ways of raising funds than this gross display of discrimination.  Any law introducing a fee should be introduced across the board, to ALL marriage celebrants, not just Commonwealth Registered Marriage Celebrants.   Why should recognized religious celebrants be exempted from any fee if they also use the MCLS? The law is the law and should apply to all celebrants.  In addition, the ability to pay a fee is merely an indicator of wealth or other income, not of “professionalism”.

Removal of the 5 year reviews

The original argument put forward by the MCLS was that an annual fee was necessary to help fund celebrant reviews.  Now the MCLS has stated it wishes to remove the 5-year reviews.  If the MCLS were so concerned about “professional standards” within the celebrant industry, then why would they want to replace the 5-year reviews with an annual fee that will further de-stabilise the civil celebrancy profession?

Finally, putting the same-sex marriage issue to one side, the Attorney-General’s Department Marriage Law and Celebrant Section staff acknowledges the Marriage Act 1961 is discriminatory. The Act needs an in-depth review and modernizing. The TCN Inc raised this significant systemic injustice issue in this February Submission on Cost Recovery and Increased Professional. This submission can be found on our website:
http://www.celebrations.org.au/submissions/926-TCN-incs-submission-re-agd-celebrant-fee-and-reforms-

Therefore the TCN Inc supports the Coalition of Celebrant Associations (CoCA) Incorporated recommendation to the Attorney-General late 2012 for a Senate Inquiry with the following Terms of Reference.  See Appendix 1

We, the members of TCN Inc., strongly oppose the “cost recovery” and removal of lifetime appointment measures presented in the above Bills.   They are completely inefficient and ineffective in “raising the professional standards of Commonwealth Marriage Celebrants”.  We therefore urge the Senate Committee in the strongest possible terms to read the CoCA submission in full, so as to fully appreciate the “reality” of the situation.

(f)     The effectiveness of the current complaints handling system.

(g)     The appropriateness of current fees and levies imposed on celebrants

(h)    Any other relevant matters.