Getting Married Legally in Australia 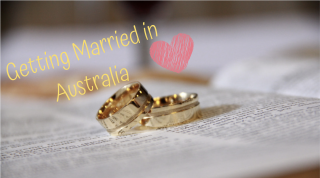 On the 9th December 2017 the Australian Government changed the marriage laws to allow same sex couples to legally marry.  This has been a long time coming for the LGBTQI community, their families, friends and supporters and it's finally here.  After waiting the required month after lodging the Notice of Intended Marriage form, those couples can, as of the 9th of January 2018, marry the person they love, regardless of their gender.


So what are the legalities to getting married in Australia?

1. be a partnership of two people [regardless of gender] aged 18+
(If one of you is 16+ and the other 18+ you can apply for special permission through the court)

2. both consent to entering into the marriage

3. lodge a Notice of Intended Marriage with a celebrant (or registry office) at least one month, but no longer than 18 months prior to your ceremony date.

4. be able to provide ID showing where and when you were born, as well as prove you are who you say you are - a passport does both of these things, otherwise a birth certificate and driver's licence works (other forms of ID are also accepted)

5. not already be legally married to each other or to anybody else - this includes marriages that have taken place overseas (any same sex marriages that were legally performed in another country were automatically legally recognised in Australia on the 9th December 2017)

6. provide proof of the end of any previous legal marriages by way of divorce, death or nullity certificates.

7. sign a declaration of no legal impediment to marry stating that there is no legal reason that the two of you can't be married. On the day of your ceremony:

* you will provide two witnesses who are aged 18+

1. Introduce themselves and state that they are legally authorised to solemnise marriages according to the law.

"Before you are married in my presense and in the presense of these witnesses,
I am to remind you of the solemn and binding nature of the relationship of which you are now about to enter."

3. Explain how marriage in Australia is defined:

"Marriage in Australia is the union of two people, to the exclusion of all others, voluntarily entered into for life."
The two of you will say the legal vows

"I ask the people here present to witness, that I, AB, take you, CD, to be my lawful wedded wife/husband/spouse." you two, your celebrant and your two witnesses will sign 3 documents:

1. you keep
2. your celebrant keeps
3. is sent to BDM for registration

Once BDM have registered your marriage, you are able to change your surname if you so choose.

The certificate you receive on the day is commemorative and not accepted at government offices as proof of marriage, so you must apply for a copy of the official marriage certificate from the BDM in the state your marriage took place (fees vary from state to state)